Posted by Kathy Dunlop at 06:41 No comments:

Posted by Kathy Dunlop at 06:40 No comments:

Results from the JellyFarm project were presented at the Deep Sea Biology Symposium in Monterey, September 2018, hosted by Monterey Bay Aquarium Research Institute.

Two sediment traps were successfully retrieved from Kaldfjorden, Troms this Summer on the 17th July. The traps have spent approximately 10 months in Kaldfjorden measuring the flux of organic material to the seafloor. An ADCP was also attached to each trap to measure current flow as part of the Fram Centre Flagship Project; WHALE (led by Angelika Renner from IMR), examining seasonal variation in fjord water column chemistry and flow circulation.

Samples from the sediment traps are presently being analysed at the Laval University, Quebec City, Canada.

Posted by Kathy Dunlop at 03:46 No comments:


The International Symposium on Foraminifera in 2018 (FORAMS2018, Edinburgh) is a conference specifically for foraminifera specialists from around the world. Foraminifera are single celled protists with a calcite shell that are known to reflect both natural and human induced environmental changes  (Figure 1, picture of foraminifera from the experiment). They are therefore a useful tool to assess the response of the benthic ecosystem to changing carbon sources like jelly-fish blooms.
During the FORAMS 2018 symposium preliminary results from the JellyFarm 2017 experiment where presented. At the moment the focus has been on the inner and outer part of the fjord as these two locations showed a great difference in Total Organic Matter (TOC) and water depth. The two factors seem to have produced markedly different foraminiferal assemblages (the various species that exist in a particular habitat) with slightly lower diversities (number of different species that are represented in a given community) at the outer most location.
For each location 4 box cores where collected from which 3 incubation chambers where collected for the different jelly-fish concentrations; respectively no jelly-fish, low concentration of jellyfish and a high concentration of jelly-fish. The diversities calculated for each jelly concentration showed that when no jelly-fish was added but only food for the foraminifera the diversities where highest, i.e. a high number of species within the community.  The diversities dropped once a concentration of jelly-fish was added to the chambers, the concentration of jelly-fish detritus does not seem to play a role. The next step is to see if these underlying factors affected the uptake of food by foraminifera, i.e. how jelly-fish detritus affects their ability to process organic material.

Posted by Anouk Klootwijk at 00:53 No comments:

This is the accompanying paper to the recent publication in Nature Scientific Reports. The results described in both papers are from field work in June 2016 in Sognefjorden conducted as part of JellyFarm wkp 5.

Posted by Kathy Dunlop at 22:52 No comments:

EFFECTS (Examining the Role of Fish-Falls on Ecosystem processes)

The team boarded the RV Johan Hjort (Institute of Marine Research). The destination was Kaldfjorden, a fjord system off the island of Kvaløya, close to Tromsø, Northern Norway.


In recent years, Kaldfjorden has been a winter stopover site for a large proportion of the migrating Norwegian spawning herring stock.  The herring have been followed to Kvaløya and Kaldfjorden by killer and humpback whales, made famous in the recent BBC Blue Planet II documentary.


Feeding by whales are suspected to result in high herring mortality and the occurrence of high numbers of herring carcasses on the seafloor. Such a large input of organic material to the seafloor has the potential to significantly impact benthic community functioning.  However, carcasses can be removed by the local scavenging community, reducing the effect of  herring decomposition on seafloor processes.  Knowledge of the scavenging communities in Kaldfjorden is very limited and one of the aims of the EFFECTS project was to assess scavenging rates on herring carcasses. 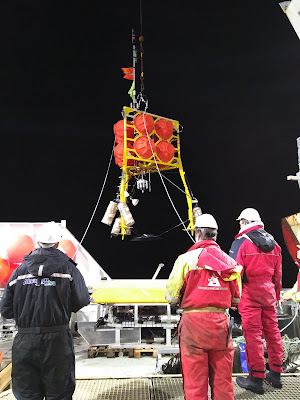 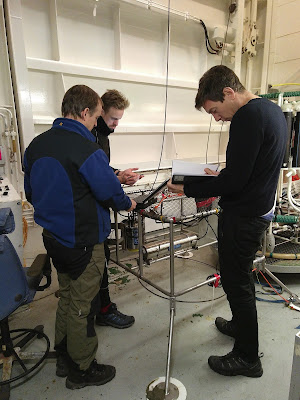 Images of the "Anonyx" camera lander being deployed in the dark waters of Kaldfjorden and the Yo-Yo camera being prepared for deployment.

Posted by Kathy Dunlop at 07:54 No comments: